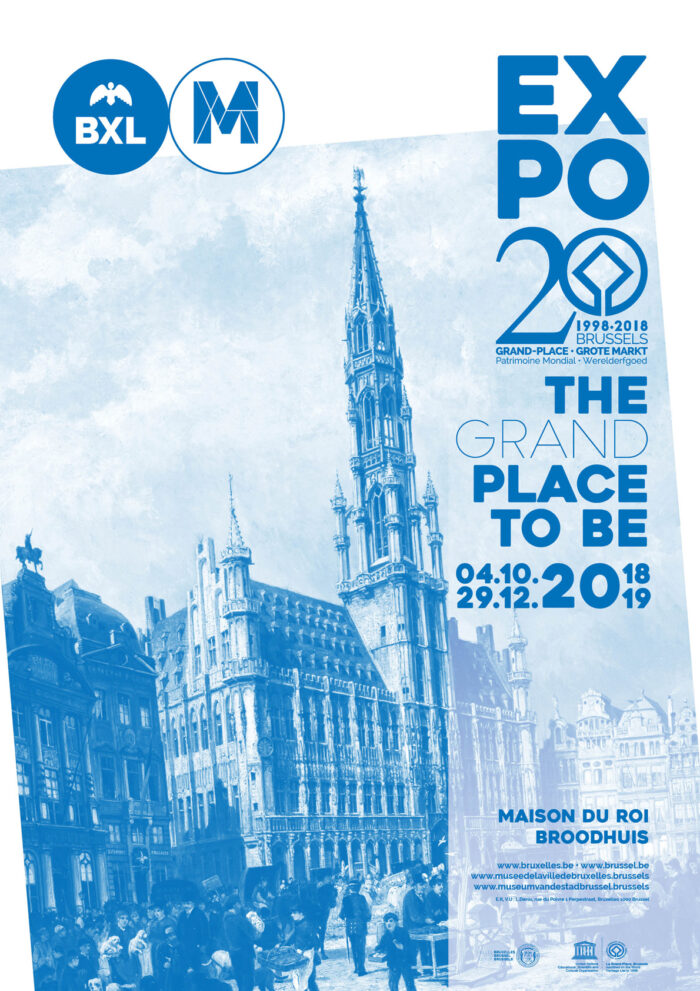 The Grand Place to Be

To mark the 20th anniversary of the inclusion of the Grand-Place in Brussels on the UNESCO World Heritage List, the Brussels City Museum and the Historical Heritage Unit presented a unique exhibition on this iconic site of Brussels architecture.

Showcasing the monumental statue of Saint Michael, a 15th century weather vane, the exhibition dealt with the history, architecture, preservation and development of the most beautiful square in the world. Rare works of art, archived documents as well as rare and original archaeological objects were placed on display for the first time. Restoration sites were also highlighted thanks to working documents, site photographs, tools and original objects from the façades.

Poster - The Grand Place to be 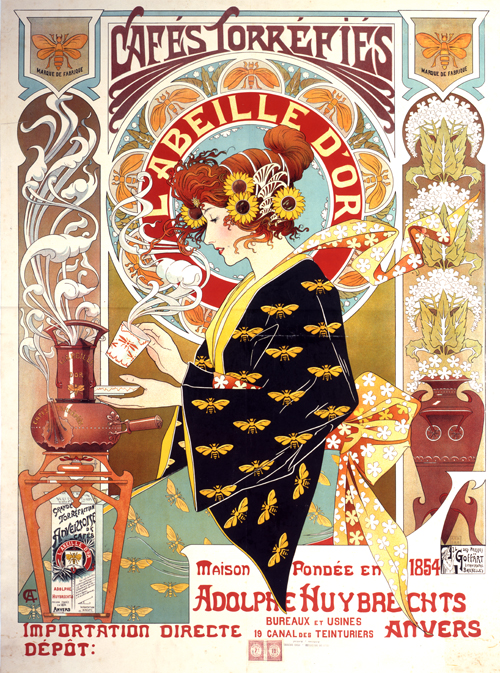 These type of posters appeared in Paris between 1870 and 1880. The style immediately becomes popular in Brussels. Many artists try their hand at poster art, from the most famous to the unknown. Seduced by this ephemeral, technically demanding medium, the posters portray the city and its suburbs in vibrant colours. The posters are also used for advertising, heralding the consumer society. A broad range of products are displayed on these posters: telephones, bicycles, cars, biscuits and chocolate, coffee and alcohol as well as circuses and theatres. The image of the bourgeois and liberated woman also represents the desire for luxury and modernity.

Archives of the City of Brussels (Brussels City Museum) 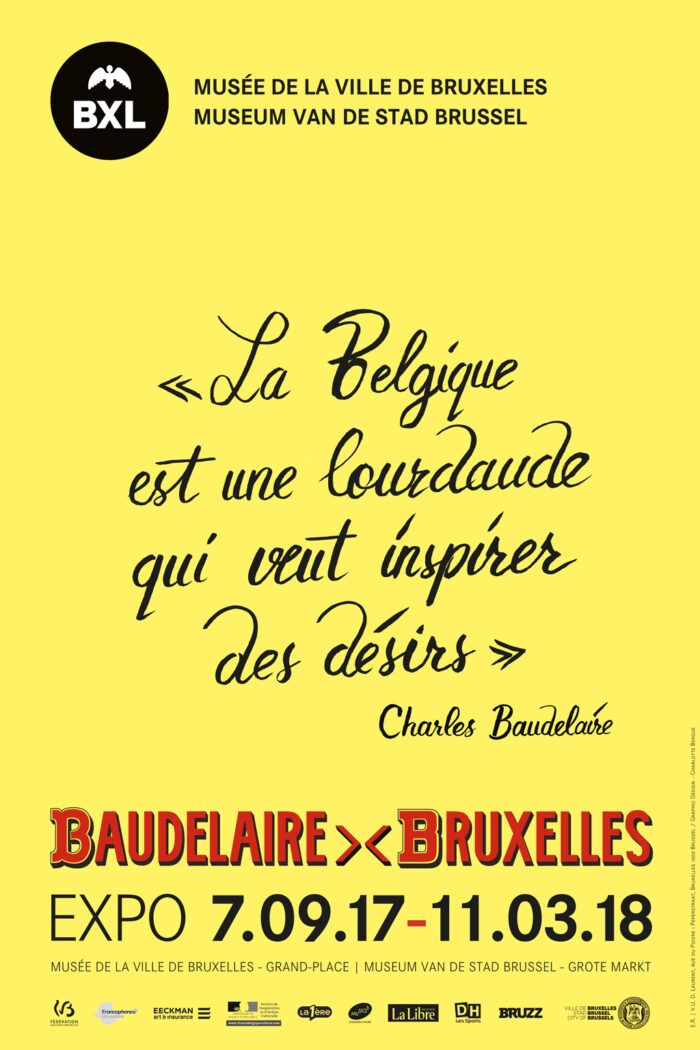 At the end of his life, Charles Baudelaire (1821-1867) spent two years in Brussels, from 1864 to 1866. He is haunted by a period of bitterness, disease and destitution. It brings the author of Fleurs du Mal (Flowers of Evil) to write a virulent pamphlet, which was unpublished during his lifetime: Pauvre Belgique! (Poor Belgium!) This pamphlet concentrated on the poet’s grievances towards Belgium; it serves as a pretext for this exhibition.

Stepping outside of the realm of the infamous words of the poet, we invited visitors to an extraordinary and impertinent visit of the Belgian capital of the 1860s, with Baudelaire as the guide. You could explore Brussels at the end of the reign of Leopold I, the Senne; at time of black soap, dog carts and the very first photographs. 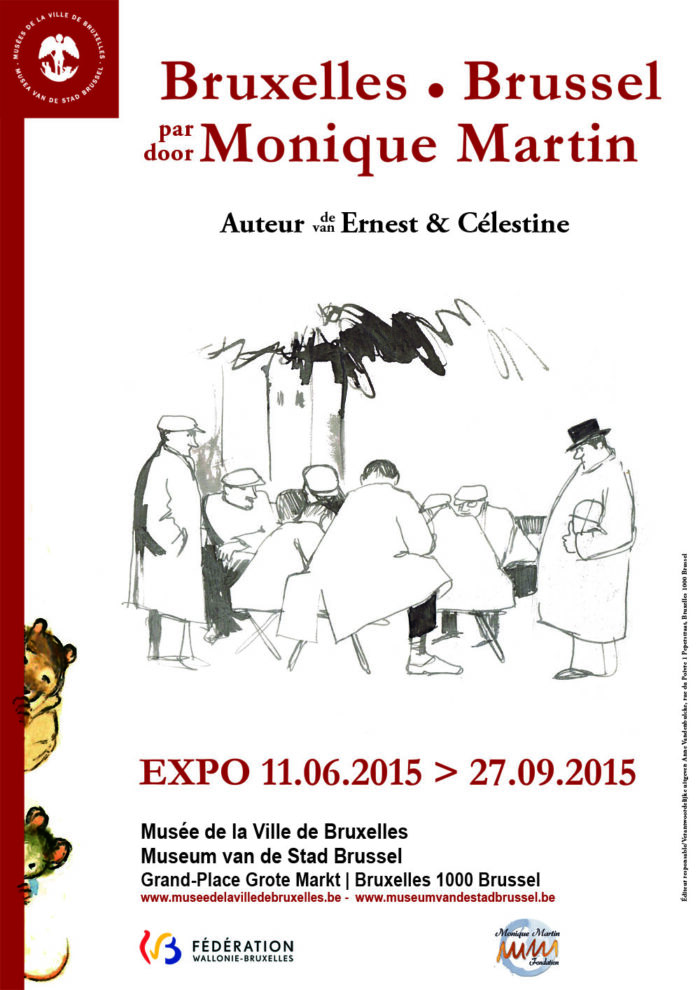 Monique Martin (1928-2000) is a major Belgian artist, a painter and illustrator, as well as the creator of Ernest & Célestine.

This exhibition set out to discover the various facets of her art, with Brussels as a common theme throughout her work. The Belgian capital, where she lived all her life, punctuated her work, whether in her albums for young people (published under the pseudonym of Gabrielle Vincent), in her landscapes or portraits. She lives and breathes Brussels.

This retrospective brought to light the original drawings of Ernest & Célestine, on-the-fly snapshots of the Palace of Justice and the unpublished work “Le petit ange à Bruxelles”, her very first album, published in 1970. 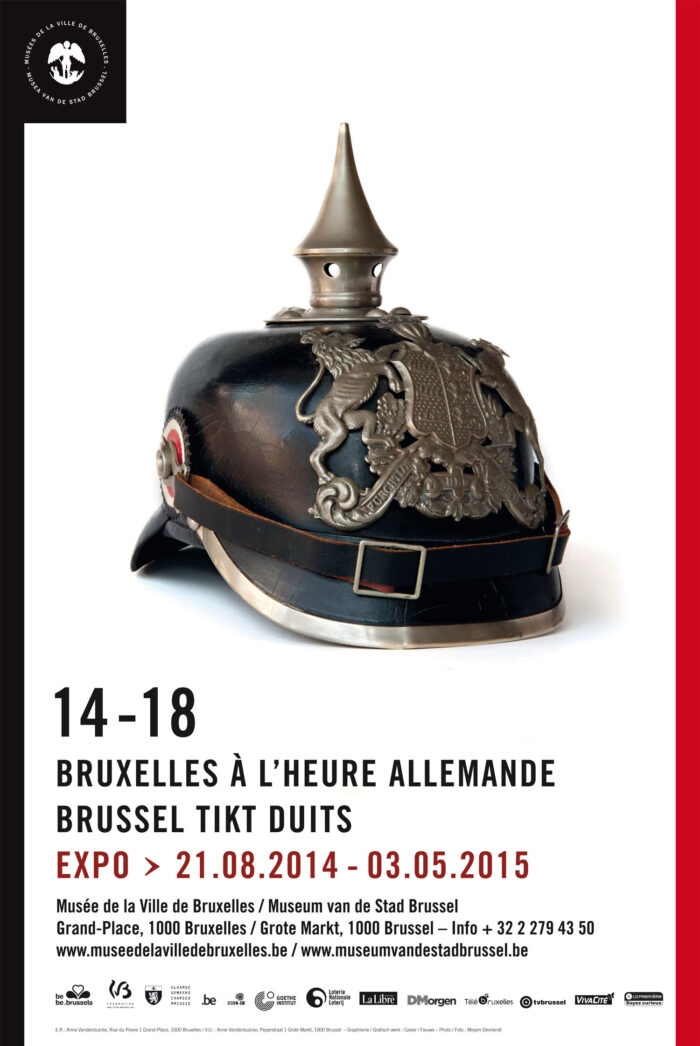 For almost four years, far from the front line, citizens of Brussels tried to survive an oppressive occupation regime. The days were punctuated by multiple orders issued by the occupying forces. The inhabitants live on German time, 60 minutes ahead of Belgian time. Subjected to the British blockade, Germany quickly ran out of supplies and used Belgian resources to support its war effort.

Carefully preserved for a century, documents and objects dating from World War I are part of the exceptional heritage of the City of Brussels.

The Archives have put these documents online 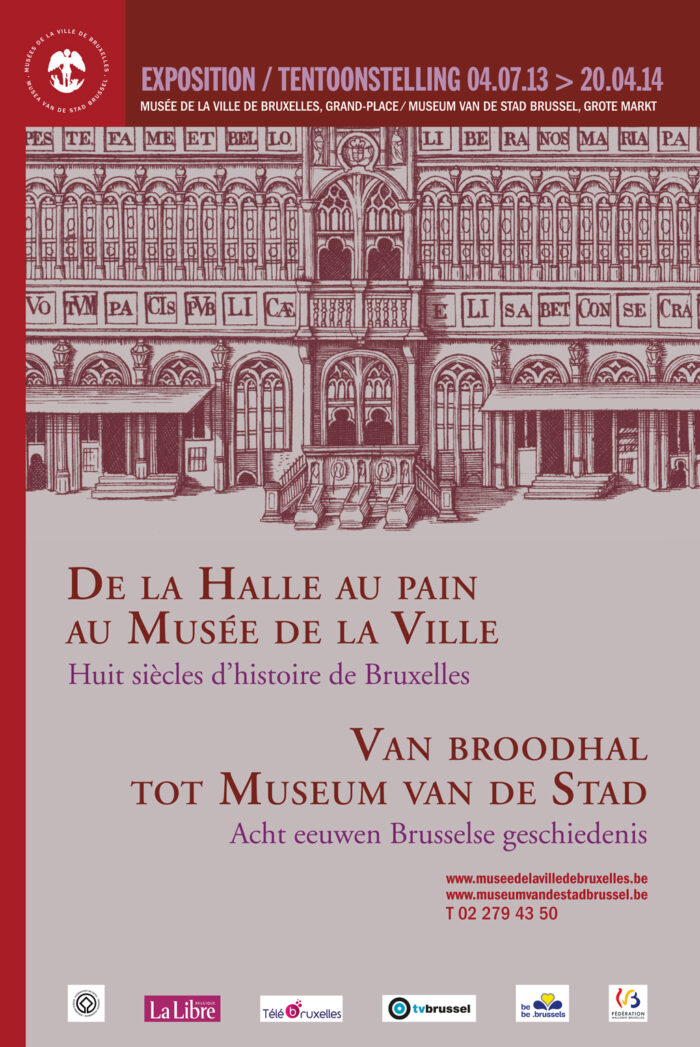 From the bread market to the City Museum

Eight centuries of history in Brussels

The 19th century Gothic Revival building, as we know it today, bears witness to a history that begins in the 13th century. The building has experienced a turbulent life: it was built, destroyed, renovated, burned down, restored, destroyed again and finally “identically” rebuilt at the end of the 19th century. In 1936, the Maison du Roi became the first listed civil building in Belgium. In 1998, it was classified a UNESCO World Heritage Site alongside the Grand-Place. 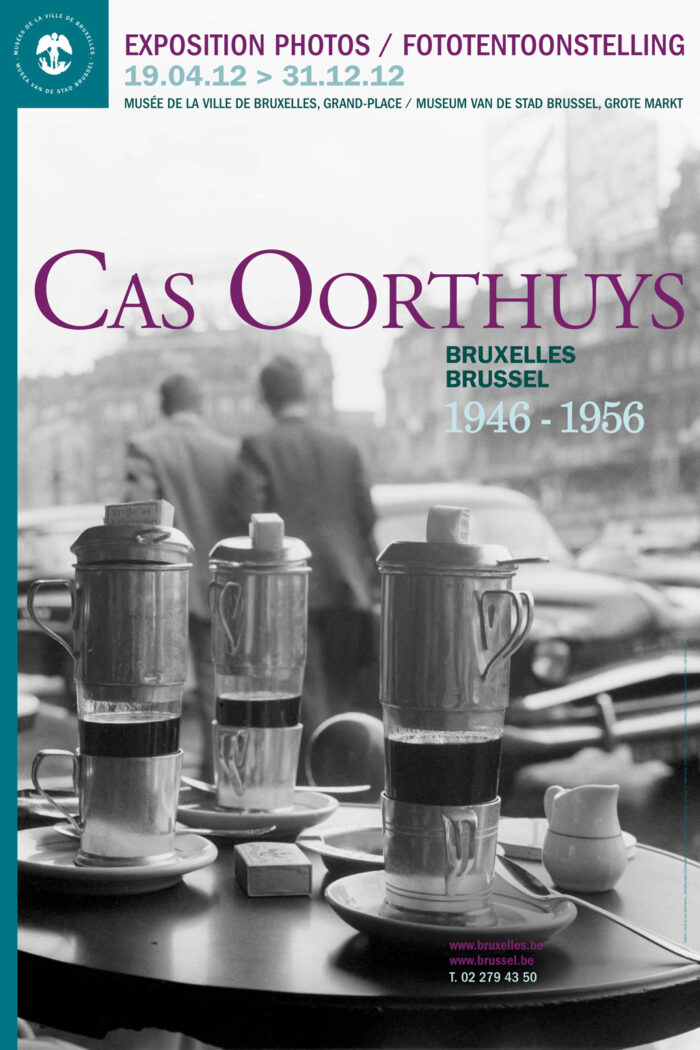 The rich collection of the Dutch photographer Cas Oorthuys kept at Nederlands Fotomuseum in Rotterdam has enabled the museum to present a special exhibition devoted to a foreigner’s observations of Brussels. From among approximately 2,000 photographs, 69 were selected to illustrate the period from 1946 to 1956, an important turning point in the history of the city. Barely ten years has elapsed between this picture of a man reading a food supply poster to these “liberated” couples at a chic restaurant.  This decade appears today as a pivotal moment between two eras. 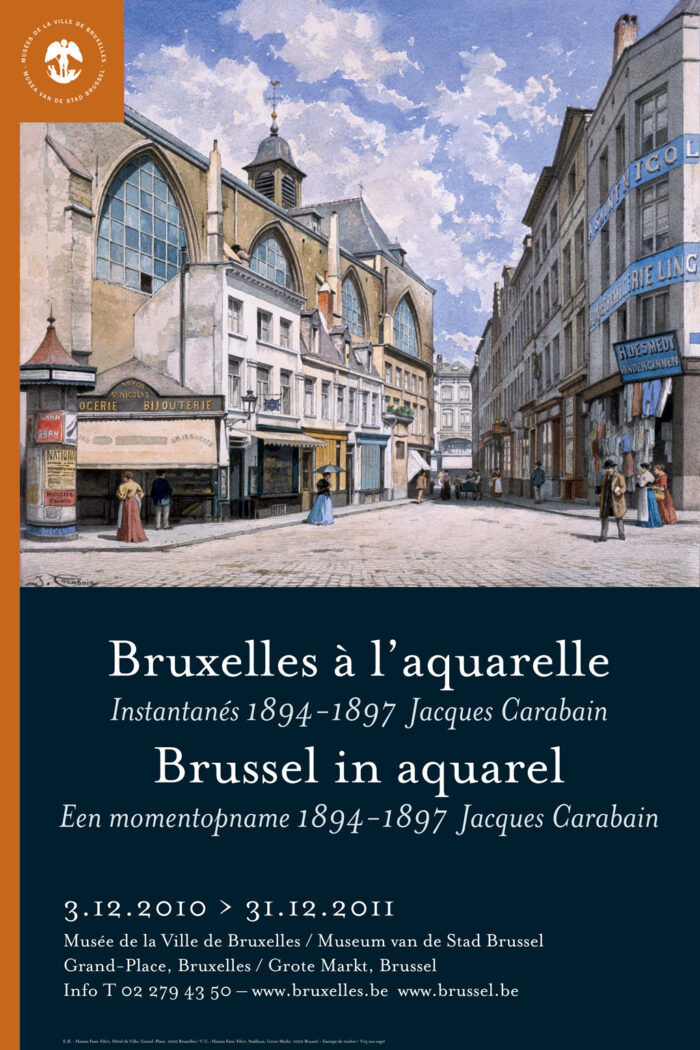 At the request of the mayor Charles Buls, the painter Jacques Carabain painted 59 watercolours of Brussels. The aim of this project was to immortalise the landscape before major urban planning works. These paintings by an extremely talented artist, kept in the Museum’s collections, are a source of information on places which have, in many cases, witnessed profound changes. Confronted with old iconographic documents from the City Archives, current plans and photos show us the evolution of these sites and life in Brussels from this period to the present day. 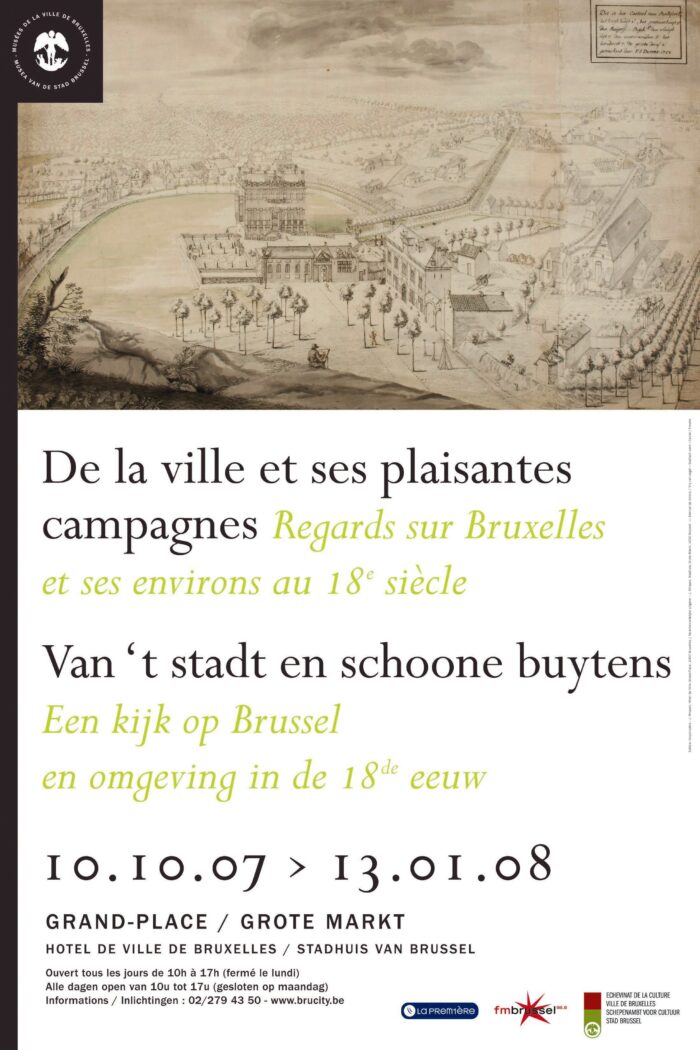 Of the city and its pleasant countryside

Views of Brussels and its surroundings in the 18th century

The Brussels City Museum presented an exhibition to the public on the landscape of Brussels in the 18th century.  Through the drawings and paintings of two impressive yet lesser-known landscape artists: Ferdinand-Joseph Derons and Andreas Martin.

Poster - Of the City and its pleasant countryside 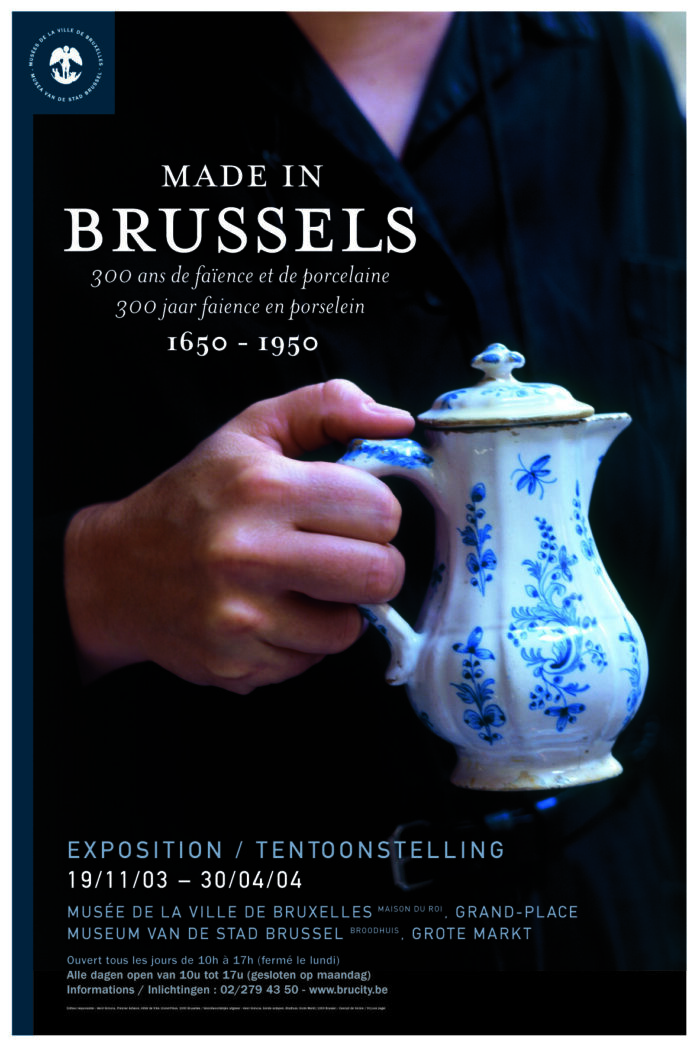 At the end of the 17th century, the first earthenware factory opened in the heart of Brussels, on the initiative of the Mombaers dynasty of entrepreneurs. A century later, earthenware production is replaced by the new production of porcelain. Notwithstanding the economic interest of this industry, a social revolution is sweeping across the country. While the nobility had expensive silver dishes that they used for large banquets, the people had until then eaten from pewter plates or wooden bowls. Consequently, a new industry begins to emerge. It marks the beginning of an artistic tradition at the service of everyday life.

Poster - Made in Brussels 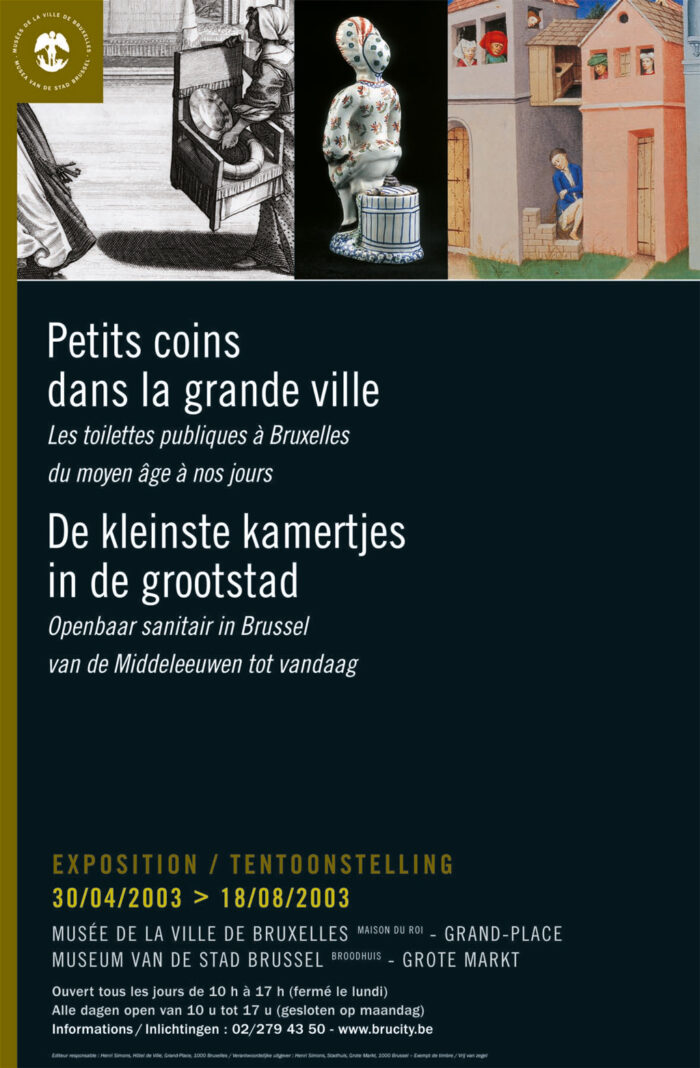 Small corners in the big city

In the city, public spaces are part of the local community for its inhabitants. Today, our public authorities have placed an emphasis on the importance of areas which encourage social interaction and well-being. And yet, in the centre of Brussels, benches are rare and public toilets non-existent whereas they were more common in Brussels from the Middle Ages until about thirty years ago. 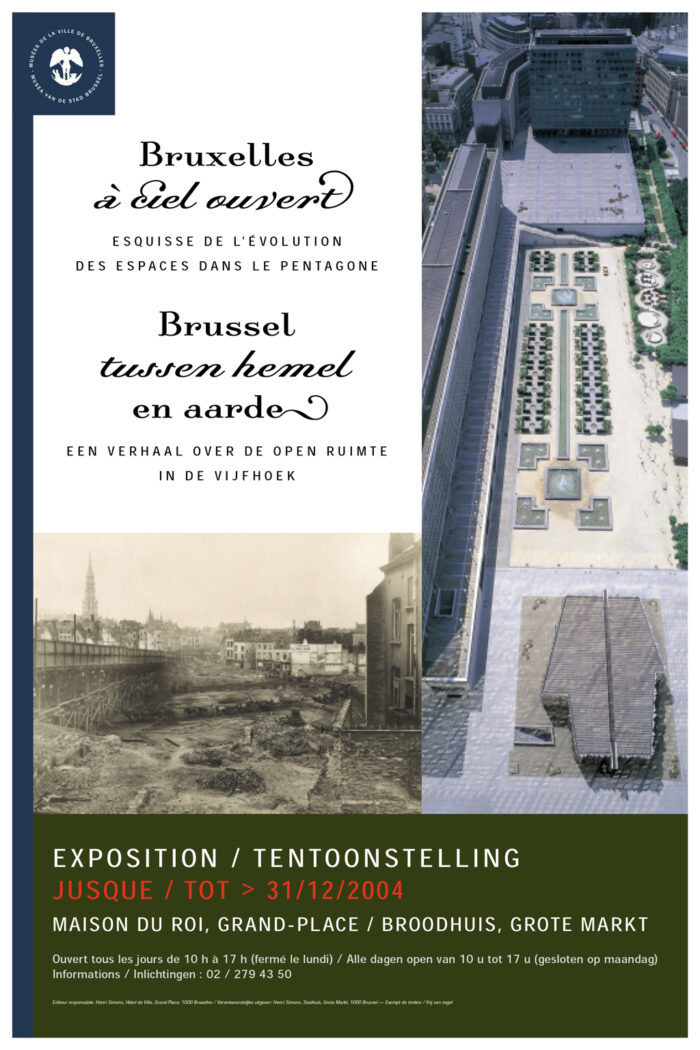 Sketch of the evolution of spaces in the pentagon

This exhibition showed the evolution of spaces such as squares, green areas, cemeteries, car parks, etc., which have developed according to the main constituent elements of the city of Brussels: a watercourse, the Senne, commercial activities, places of worship, political centres. Photographs by Marie-Françoise Plissart completed the exhibition and weaved a link between a certain “bucolic” image of old Brussels and the contemporary city.